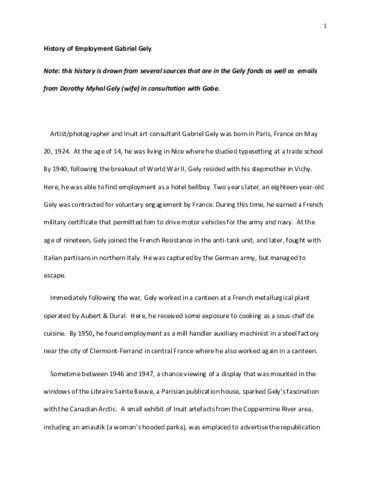 Standardized form(s) of name according to other rules

Other form(s) of name

Gabriel Gély was an artist and photographer. His artistic subjects primarily are Inuit and Inuit communities. Gély also played a pioneering role as a government advisor and promotor of Inuit art.

Gély was born in Paris, France on May 20, 1924. From 1942 to 1945, he was active in the French underground. After the war, in the late 1940s, Gély became fascinated with the Canadian Arctic and Inuit artefacts and, in 1952, he travelled to Canada to pursue this interest. By 1953, he was working for the Department of Transport (DOT) as a cook in Kanngiqtugaapik (Clyde River), Baffin Island.

From 1956 to 1960, Gély worked in several locations in southern Canada and the US for camera stores and photography companies. He then took a position with the National Museum in Ottawa as a museologist for their Arctic materials. From 1963 to 1988, Gély worked in various positions in northern communities in close relationship with Inuit.

Gély began painting as a self-taught artist while still living in France. He continued his artistic practice in Canada and became known for his portrayals of northern peoples. Gély's artwork can be found in private and government collections such as the Glenbow Foundation, the Imperial Oil Collection, the governments of Canada and the Northwest Territories, the Mendel Gallery in Saskatoon, the Prince of Wales Northern Heritage Centre in Yellowknife, and the Nunavut Legislative Building in Iqaluit and it has been shown in galleries in the North and across Canada.

While a youth in France, Gély purchased his first camera. During his time in Canada, Gély owned several other cameras. He took hundreds of photographs of Inuit documenting their daily lives and learned to develop the film himself. His photographic collection spans over 30 years from 1954 to 1987 and records life in many northern communities.

Dates of creation, revision and deletion

The linked digital object was created by Katherine Pettipas (2020).